From a consumer point of view, what we want is quite straight forward. A great, high quality product, cheap and fast. From a corporate perspective, high margins, market share and preferably a weak competition is desired. This would lead prices to go higher, and simultaneously a slowly declining quality of the product.

Usually, neither of these scenarios is achievable. That is the strength and beauty of a free and open market economy. It creates equilibrium between these two states.

Companies will however try to achieve their goals by creating something that is similar to a monopolistic situation, where they can control the market price. The reason for regulations then is to make sure that the deadweight loss is minimized, and that the consumer doesn’t pay an unnecessary high price for a low-quality product.

But in pure play digital products, this logic is somewhat reversed. Let’s look at Google, for example.

From a consumer point of view a monopolistic situation can be beneficial in the digital realm. When I use Google’s search engine, I can be certain that I find the most relevant search results. There’s a huge value in that. On the backend of their business, the supply side, a monopolistic situation is also beneficial, in the sense that I can easily provide my data to Google (in the form of my website etc.) that can be searched and found by anyone in the entire world in less than seconds, knowing that this is the place where they will go to find me. The opposite in both these cases would be cumbersome and inefficient.

So, clearly the network effect creates monopolies that also can be advantageous to the consumer and the suppliers.

However, there are a few problems with this

Probably, the primary one is that you put enormous power in the hands of a few. In fact, they can absolve themselves from responsibility in part, by pointing at the algorithm. Let’s call this ‘The gatekeeper problem’. The gatekeeper position was used by Google to create unfair advantage for Google Shopping, and the companies who were buying their ads. Basically, Google created unfair advantages by using its monopoly powers.

Google’s motivation has for the longest time been (succinctly put in the Don’t be Evil-manifesto) that as long as the user is happy, we have solid foundation to stand upon. Basically, this means that the users’ needs have to be prioritized over the corporate goals. In the long run, when users are satisfied, the interests of the parties will align. Unfortunately, Google has two primary user groups; demand-side (being the searching party) and supply-side the companies and individuals that gives Google the searchable data.

Let’s label this, ‘The primary user problem’. What happens in the long run, as monopolistic powers is accrued? It becomes obvious that great returns can be made by violating this principle, with the precondition that the user doesn’t realise or know what is going on. In fact, it is supply that takes the first major hit, because they are been treated unfairly in this case. The user will probably still find the cheapest teddy bear, albeit the teddy bear coming from the company with the greatest resources and skills to make it into the Google Shopping selection in the top of the SERP.

At this point, Google do no longer care for the user or the suppliers that created the monopoly for us. Inevitably, and unfortunately, they limit the choices that are presented to us as consumers. If this practice continues for too long, it will undermine the trust that Google has built up over two decades and our willingness to blindly believe that a relevant selection (for me) of the web is on the first (or second) SERP. 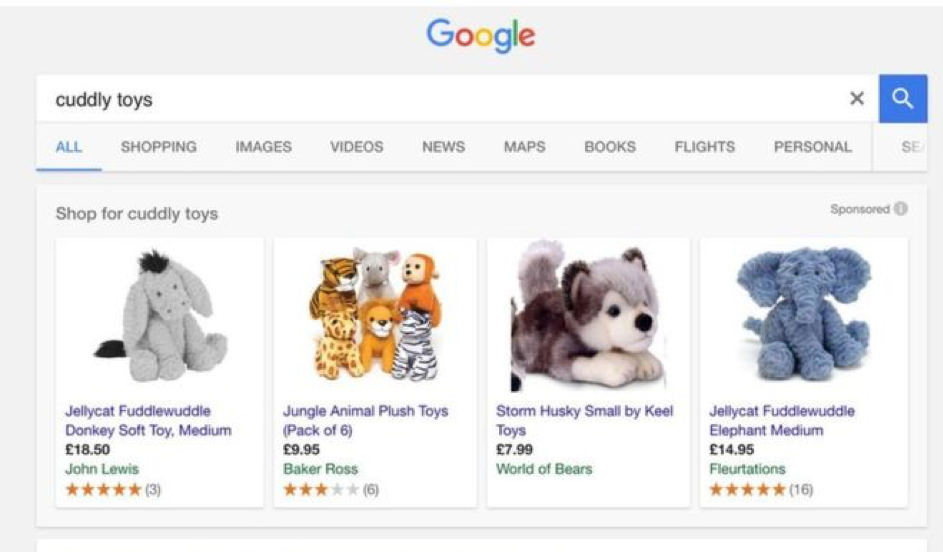 In the long run, for startups and companies trying to create new online services, the incentive to innovate will diminish since it becomes harder to compete with huge companies acting like monopolies.

How does it affect a startup company that amasses data over a long period of time, that it in a sweep could be taken by Google, to enrich their own service – all with the rationalisation that its good for the user?

It might very be good for the user, but the moral conundrum here is obvious.

Google as a common good?

Would Google then. be better as a common good? With market share of over 90% in most parts of the world, it definitely appears and acts like one. The fact is that it is a listed multi-billion dollar company with roughly 2000 shareholders. That is a lot of of power in the hands of a few. However, Google as government owned common good is not a feasible direction to even ruminate upon, and probably not even preferable for a myriad of reasons.

Regulation and strict oversight of their practices seems to be a fairer way to approach this, and necessary to continue to have a competitive and strong entrepreneurial drive. After all, even FANG companies should face disruption from a vibrant and evolving startup community. Even todays leaders of innovation will become old and faded, if we make sure that we have a functional marketplace. Let’s hope for that.